Nor did I bike!

Obviously, that put a wrench in my plan to try to get in at least one longish run before next weekend’s 10 miler.  Instead, I drank warm tea and took care of stuff before going to my yearly physical.  Spoiler Alert…I am super healthy with awesome cholesterol!

Meanwhile, Cooper helped the BOY study for his last final of the semester (still lounging on my new placemats where apparently he has been available to assist with studying all week!). 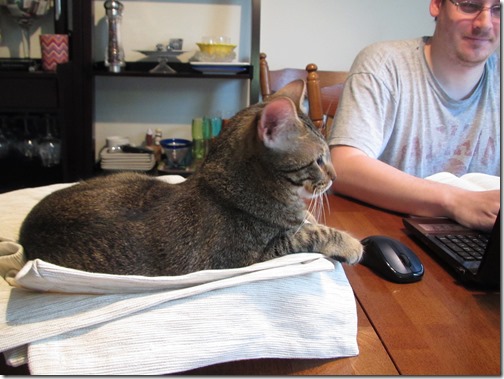 After my doctor’s appointment, I was lucky enough to meet my best friend for a weekday lunch.  I love being a ‘lady who lunches’ aka someone who can go out for lunch with a friend during the week : )  On my way home, I swung by the grocery store for dinner fixings and walked in the door just in time for a conference call.  By the time it was over, the sun was attempting to emerge (and there was no more snow), so I decided to go out for a walk.

The clouds were still dark but after two weeks of rain, the grass was vivid green! 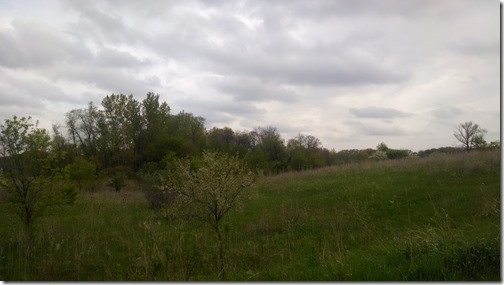 I walked for an hour breathing in the fresh air and enjoying a quiet Friday afternoon.

The BOY called while I was walking to say that his final final was done!  Hooray!

Since we will be in the city all weekend, we decided to do dinner in.  I roasted some potatoes and broccoli and the BOY made the best homemade scallops EVER!

We had a special Friday night dinner reminiscing about the last 3 years of law school.  A lot has changed since his first day of law school (you should definitely check out my young blog and our young pictures), yet many of the important things have stayed the same.  We spent the rest of the night listening to music and talking at the kitchen table.  With maybe a sip of wine and bit of singing and dancing too!  BTW, Cooper hates my singing!

Tomorrow morning, we are driving back into the city for another wedding shower for my future SIL and just made BYO sushi plans for dinner.  Then Sunday is the big graduation day.  Thankfully, I have Monday off to recover from this crazy four day weekend!  Fingers crossed and weather permitting, I may even be able to go for an outdoor run tomorrow!

Did you get snow today or did you run?  Or neither?

Leave a Reply to Luv What You Do Cancel reply