Skip to content
HomeA Reason Not to Hit Snooze

I’m back to work this week and really happy with my new job (thank you all for asking), but struggling with the early morning wake ups.  I’m sure the holiday weekend had something to do with it : )

Tuesday, I had intentions of going to the gym in the morning before work, but reset my alarm to catch up on some Zzz’s.  I think it was the right decision.  Wednesday is my early morning at work and I was looking forward to getting home at a reasonable time to eat a sit down dinner with the BOY (and of course Cooper).  I left my workout clothes from Tuesday out for Thursday morning motivation.  I wasn’t sure if that would be enough, so I also made a new version of overnight oats.

I placed everything into the crockpot Wednesday night and asked the BOY to hit start before he came up to bed.  He stays up way later than I do.  Around 3am, I heard a crash.  Or at least I thought I heard a crash.  It has nothing to do with my dream and definitely woke me up.  Of course, my mind goes straight to Cooper trying to break into the crockpot so I came downstairs.  Cooper has been spending more time in the kitchen, which I don’t like, but he and my crockpot are going to have to learn to coexist!

I made my way downstairs and found a sleepy eyed Cooper as clueless as I was.  I checked the crockpot…all intact, but cooked.  Sometimes, I hate that my slow cooker cooks things so quickly.  At first I thought the edges were burned, but it turns out they were more like baked oatmeal.  Content that the house was safe, I turned off the crockpot and went back to bed.  But first, I had to remove the kitten who I found curled up on my pillow.

This morning, my alarm went off as predicted and as predicted, the BOY said, ‘Stay here in bed!’.  I was planning on using the oats to get me out of bed quickly, but since I knew they were cooked, I did hit snooze….7 minutes later, I went down stairs to check things over. 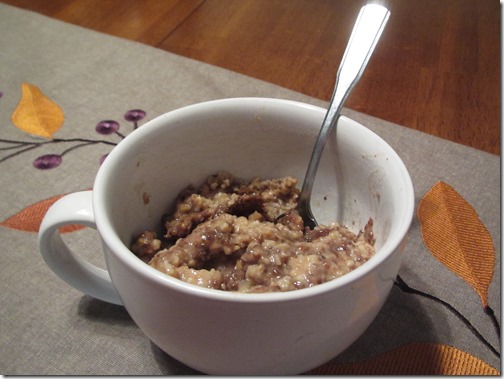 Breakfast was thick, warm, and fragrant.  I decreased the amount of sweetener from the original recipe and because the apples were so flavorful, I didn’t miss it.  I ate a warm bowl of oats before changing into my workout clothes and driving to the gym.  It’s been a long time since I’ve done an indoor speed workout.  I timed my morning well, but totally forgot to add in the cuddling and feeding Cooper time.  So I was left with only 30 minutes to run.  My initial thought was to do a 90/90 intervals.  I started with a 5 minute warm up, but 30 seconds into my first push, I realized that I wasn’t quite read for 90 seconds.  Instead, I switched to a 60 second push/120 second recovery completing 8 intervals and finishing out my cool down as I jogged out the door for home.  On my way out the door, I opened our closet to grab my shoes and found the shoe rack toppled over…most likely the cause of my middle of the night boom.

It was a big priority for me this week to get back into the swing of things with a full time job and exercise.  Setting my alarm at 6am is something that I’m not quite used to, but today was a good start.  The good news with my crockpot oats is that I now have breakfast ready for the rest of the week (and some frozen for next week).  The bad news is that I am exhausted and Cooper is hiding out waiting to play. 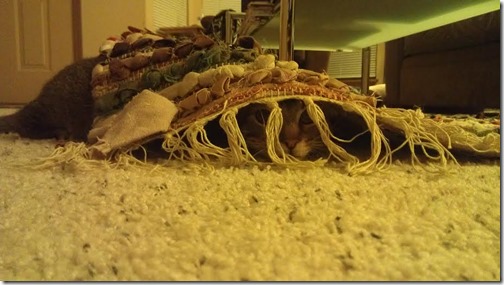 Do you make oatmeal in your crockpot?

I’ll need a lot of motivation to get up and moving as the mornings get colder and darker!

This Breakfast Porridge is one of my favorites!

Slightly Adapted from Crumbs and Chaos

Coat inside of slow cooker with cooking spray or use crock pot liner.

Add all ingredients to your crockpot and stir.

Cook on low per crockpot directions.  I used the 10 hour setting and the oatmeal was ready in about 5 hours.

Store leftovers in the refrigerator or freeze in individual containers.

19 thoughts on “A Reason Not to Hit Snooze”