I can’t thank you guys enough for your suggestions and encouragement after yesterday’s post!

I decided not to run this morning.  The main reason…

I wanted to have a glass two glasses of wine last night.  After work, the BOY and I sat out back with some bubbly chatting about the week.  I just love summer nights like that and wasn’t about to rush in to bed.  Instead, I stayed up late and then slept until 8ish this morning.  Breakfast options were slim, but I was able to throw together a green smoothie with spinach, oats, and whatever fruit I could find for breakfast. 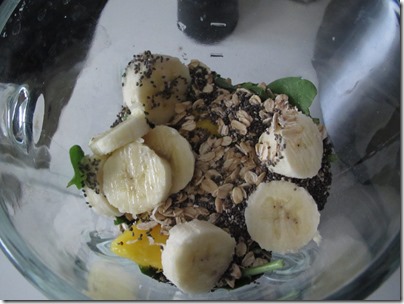 So a Bikram yoga studio opened up a few towns over in December and I have been talking about going since then.  I was re-inspired when two separate people mentioned this studio to me this week.  I was excited to blow off my run this morning and meet a friend at the studio for the 9:30am class.  Although I’ve been doing yoga for 10 years, I had no idea what to expect of Bikram.  I knew that it would be hot and that it was a pre-determined serious of 26 postures…that was about it!

So when class started with a breathing exercise and the entire class seemed on cue and I was lost, it was even more apparent how little I knew.  Post class, I looked up more information on the yoga studio’s website…

Bikram Yoga is a challenging series of 26 postures and two breathing exercises developed by Bikram Choudhury designed to stretch, strengthen and restore health to every part of the body. Bikram’s beginning yoga class is designed for anyone that wants to improve his or her physical health and mental well-being. The Bikram Yoga practice is 90 minutes in duration and practiced in a 105 degree heated room, which helps to warm the body and allows for deeper and safer stretching. The heat also prevents injuries and rids the body of toxins while relieving stress and tension.

What surprised me most was that some of the poses were the same and some were different from my usual yoga class.  I was also surprised during the second half of class by the 20 second shavasanas in between poses.  And that we were encouraged to keep our eyes open.  In the beginning, I felt strong with the balance poses, but by the end, my cheeks were as red as a tomato and sweat was poring out of every pore.  I just wanted to lie on my mat and rest (for longer than 20 seconds).  I really liked the studio and found the people warm and welcoming.  As far as the class goes, I think I am more of a fan of a vinyasa style class that moves through a variety of postures.  This may be because it is what I am used to.  But I’m interested to see if my muscles will be sore tomorrow.  I was able to get a great 30 day introductory deal, so I am planning on trying another class and excited to have a friend to meet me at the studio.

I know that some of you do yoga…

Do you like Bikram?  What did you think after your first class.

I was crazy sweaty after class, but made a stop at Whole Foods on my way back home.  Then the BOY and I went out for a quick bite of lunch.  Good News…

My farmer’s market is BACK!  Today was the first day that they were open in their typical location, and the BOY and I were there as they were still setting up fruits and labeling veggies. 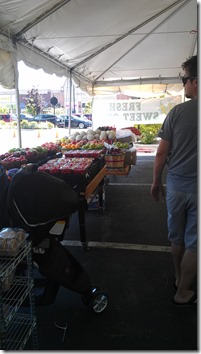 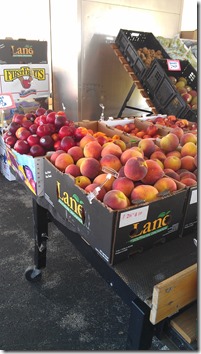 Everything looked so fresh and their prices can’t be beat!

There will be no wine tonight as I am setting an early alarm in hopes of accomplishing a 9 mile run tomorrow before the worst of the heat.  It’s just me, my computer, and 4 stages of the Tour De France on DVR!

7 thoughts on “I tried Bikram Yoga…”