New at our house, that I can share with you now that my anger has somewhat dissipated, is the smoker that I returned home to find after spending two days at my parents in the beginning of the week.  Apparently the BOY thought we needed one of these in our backyard and ordered it from Amazon.

What is hilarious is that the smoker is the talk of the backyard neighborhood.  All of the guys have been stopping by to inspect the smoker and talk meat. 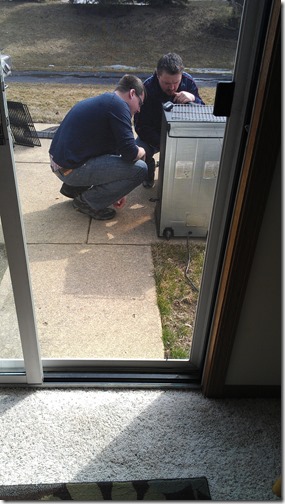 You probably think that I am kidding, which is why I had to capture it on film!  I, on the other hand, am not so amused!  Meat just doesn’t get me all worked up, so instead I spent the afternoon baking cookies and spring cleaning.   The good news is that along with playing with his smoker, the BOY also cleaned up his grill and refilled the propane tanks.

On the BOY’s agenda for this weekend…smoked brisket (apparently also known as pastrami) and beef jerky.

For me, the BOY made salmon and asparagus on the grill for dinner last night.  Who knows why he served it to me on a Christmas plate! 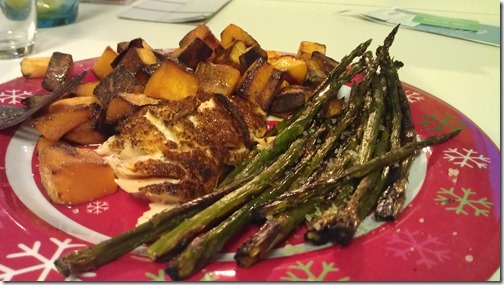 The BOY also bought this contraption to make Beer Can Chicken.  Which for Passover is going to be Soup Can Chicken!

This is the game plan for tonight’s dinner, so I’ll let you know how it turns out!

Need I also add, that the BOY has been talking about his smoker all week long, including a few phone calls to me at work to talk meat.  In one, he actually asked me if I would come home and clean out the inside of the chicken he just bought?!

Ahhh…But if this new hobby means he will be making more dinners, I could, perhaps get over it!

Do you have a smoker?  What’s the hype?

Does your husband, boyfriend, roommate have a new toy or hobby that you just don’t get?