I discovered sweet potato pie during my time living in Memphis, TN.  I even remember where I had my first taste.  I was skeptical at first but the BOY ordered it for dessert, so I picked up my plastic fork and took my first bite.  It was a party in my mouth from first taste.  Sadly, I don’t have any pictures of this amazing moment, but I do have tons of pictures of the BOY enjoying fried chicken in that same spot!

Every visit to Gus’s since then, whether with the BOY, my friends or family, sweet potato pie was ordered.  Often, multiple slices!  Whenever I make my way back to the mid south, there are a few restaurants that I HAVE to visit and sweet potato pie at Gus’s is always top of my list!  I actually had never made a pie when I attempted my first Sweet Potato Pie as a new blogger for New Years Eve 2010-2011.  It turned out incredible!  Can you believe that I haven’t made one since?  It was the first thing that I suggested when I knew we’d be home at my parents for Thanksgiving this year.  Since I had to work Tuesday and Wednesday, I got started a little early with the sweet potatoes.

The recipe suggests running your potatoes through a fine mesh sieve.  After 1/2 of a potato, I had some serious carpel tunnel and a centimeter of sweet potato.  I figured that there had to be a better way of doing this, so I pulled out my immersion wand, which worked out so much better. I highly recommend going that route first.

I had plenty of sweet potato puree that I packaged up and sent home to my parents.  Thursday afternoon, I was ready to make my pie.  I bought a premade frozen crust from Trader Joe’s.  The only problem is that when I tried to thaw it out, it broke apart. 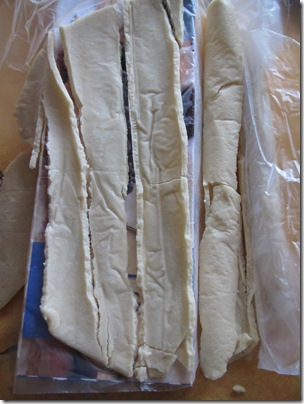 I was able to push everything back together to form it into a crust. 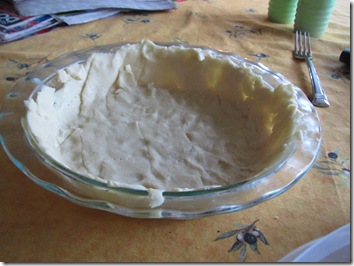 The pie crust baked up just fine.  It didn’t look real fancy, but it tasted really good!  Meanwhile I got to work on the filling by mixing together the sweet potatoes with plenty of spices!

I had some help pulling everything together since the majority of us where in the kitchen working on dinner by this point. 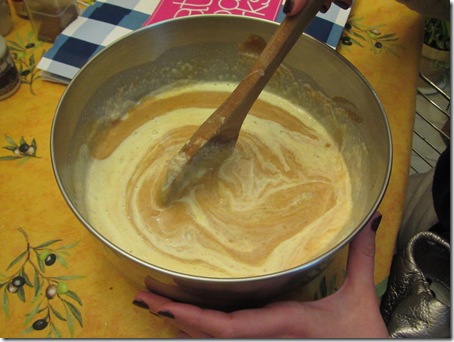 The pie went into the oven just as we sat down for dinner.

40 minutes later, the pie was ready.  It looked beautiful and went straight from the oven to our table.

Along with a pecan pie and baked apple cobbler and of course Cool Whip as a topping!

The sweet potato pie was fantastic!  It is one of my all time favorite pies, and I was so happy to share it with my family!

After dinner, we all retreated to the living room to watch some football and work on a puzzle.  My brother made a fire, which was perfect since the weather had really cooled down. 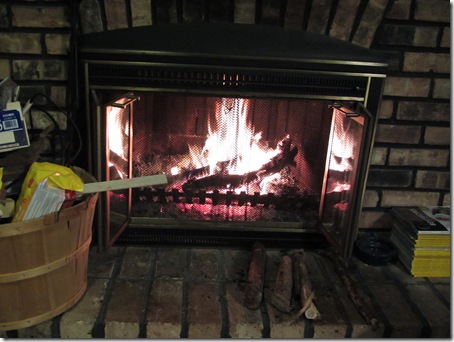 The puzzle making was intense as we all battled to be Puzzle Master and find that key piece.  We did have to take one dessert break, which became BYOF (bring your own fork) with no plates required…ha ha! 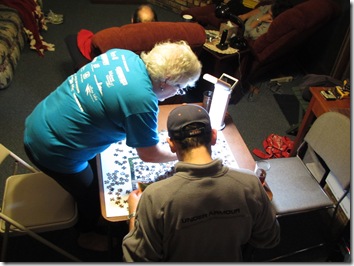 We had our puzzle finished before heading off to bed with full tummies and happy hearts!

And I even had leftover pie for dessert the rest of the weekend!

From The Food Network

Roll the dough out on a lightly floured surface to a 12-inch circle. Carefully transfer the dough to a 9-inch deep pie pan and ease the pastry into the bottom and sides of the pan. Press the dough into the shell and crimp the edges in a decorative pattern. Using the tines of a fork, lightly dock the base of the shell. Place the shell into the oven and bake until lightly browned, 12 to 15 minutes. Remove from the oven and brush the bottom with the egg white. Set aside until ready to use.

Rub the sweet potatoes with the vegetable oil and roast in the oven for 45 to 60 minutes, until very tender. Remove and set aside to cool. Peel the potatoes and pass the flesh through a fine mesh sieve using a rubber spatula. (Or use your immersion blender…so much easier and faster!)  You should have about 1 1/2 cups of smooth sweet potato puree.

In a medium mixing bowl, combine the sweet potato puree with the sugar, maple syrup, ginger, cinnamon, nutmeg, cloves and salt. Whisk to combine. In a separate bowl, combine the heavy cream with the eggs and whisk to combine. Add the cream and egg mixture to the sweet potato mixture and stir to blend. Pour the batter into the prepared pie shell and place the pie on a sheet pan.  Bake until the center is set and the tart is golden brown, 35 to 45 minutes. Remove the tart from the oven and allow to cool for at least 20 minutes before serving.

*I used a premade TJ’s piecrust, but here is the recipe for homemade pie crust from The Food Network