As soon as I knew that I wasn’t going to run the Chicago marathon this year, I was excited to go watch!  I have never been a spectator at Chicago’s biggest race before.  Last year, was my first time at the race and I was a runner.  I loved every minute and had a really positive experience…in huge part because of the crowd encouraging me through every mile.  And of course my amazing family!

I stayed downtown last night and was up early to meet a friend of mine at mile 5.  We decided to spectate by bike and as I pedaled my way towards the course, I saw the first wheelchair athletes emerging on the course.  I find these men and women to be so inspiring and was surprised to see how choked up I got cheering them on.  Shortly behind them came the leading elite athletes.  This was definitely a site that I didn’t get to see last year.  I had no idea that they were led by bikes and a pace car! 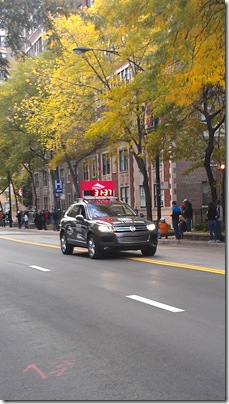 I tried to snap a photo of the leaders, thinking that one of these guys would win the Chicago marathon, but they were WAY TOO FAST to be in focus! 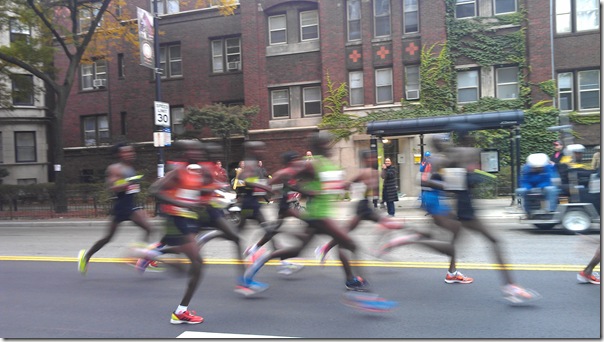 Man, those guys are speedy!

Mile 5 near Lincoln Park was beautiful with the colorful leaves and full of energetic runners and cheerleaders! 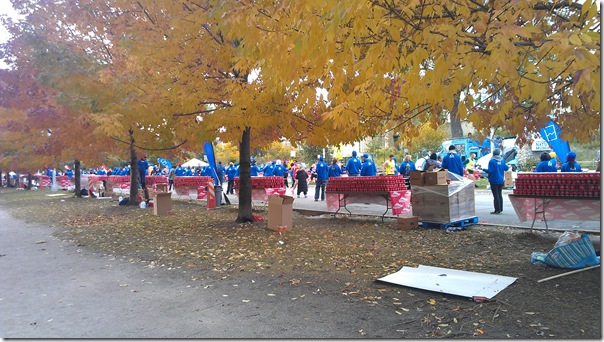 It was a bit challenging making my way through the closed roads and crowded sidewalk by bike, but I found the perfect little nook to cheer on the runners. 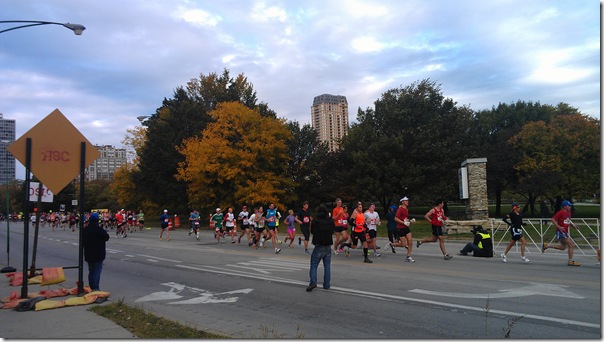 I was able to see one of my friends sprint by looking strong and enthusiastic.  One of my favorite things about the Chicago marathon is all of the neighborhoods that you run through.  Our next stop was Broadway near mile 9.  It took a little research to figure out the best way to get there, but we made it.  The weather was chilly and perfect for running. I’d be lying if I said that I wasn’t a little jealous after last year’s 80 degree marathon heat wave!  Once we arrived at our next location, I was ready for a coffee break.  We went into Starbucks where I ordered a pumpkin latte (yum!) and admired the smart people watching the race from indoors.

However, that didn’t work for us because we had this AWESOME two-sided sign, noise makers, high fives, and cheers for the runners, so we needed to be on the front line! 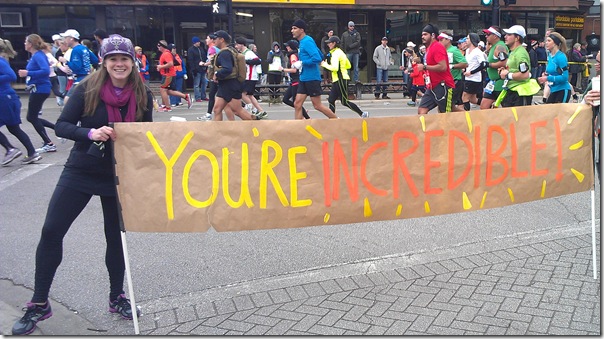 We saw a few different friends go by and got a lot of smiles and shouts from the runners.  I cheered extra loud for all of the St. Jude Heroes, along with all of the other charity runners.  This is also where I saw some of the best Tshirts of the day!  It was so fun and incredible to be a part of the race!

Because 26.3 would just be silly

Our next stop was downtown.  We happened to hit an early marathon race street post runners before it opened to cars and soared into the loop.  It was amazing to ride through the heart of the city like this.  Along with some other bikers, we took a few detours as we discovered which roads were closed (some for the race and others for construction) and arrived at the perfect location, about 1/2 mile before the finish with enough time to meet friends, share our sign, pass out noisemakers and watch the runners, including our friend, proudly finish their 26.2 mile journey.

Throughout the day, the music was blasting and the energy in the city was contagious!  There were parts of me that really wanted to be out there running (who wouldn’t on this perfect fall day), but I had so much fun participating from the sidelines. 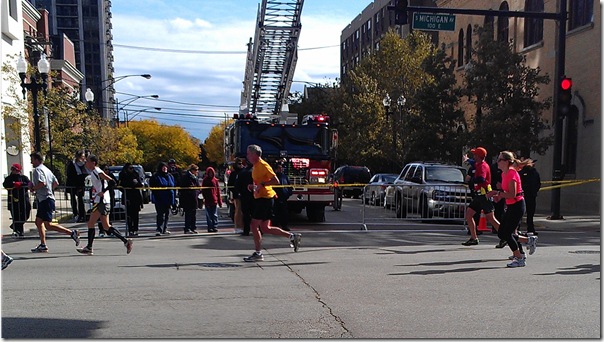 I was sad to finally make my way to Union Station to catch the train back home to the suburbs.  But I wanted to be home on the couch for the 3:05pm Bear’s game.  The BOY picked me up at the train station and my voice was hoarse as I relayed all of the day’s stories and excitement.  We made a quick stop at the store to pick up the fixin’s for chili.  We went off recipe creating a Red Chicken Chili to be enjoyed after the Bear’s Victory!

What an AWESOME Chicago Day!

Were you a runner or cheerleader today?

What is the best race Tshirt that you’ve seen?