My morning started off quite nice with a complimentary beverage of my choice from Starbucks.  Well, actually when my alarm went off, I had no idea what the noise was.  After a 4 day weekend, I guess I forgot the sound of my alarm : )  I did get myself up and out for a 5 mile run.  The weather was perfect for a cool morning jog, and my toe held up just fine.  I’m still not particularly fast, but running feels good!  I’m ready for my toe to heal and get back to building up my miles, but I will just have to be patient.

After the run…came the free venti cinnamon dolce birthday latte! 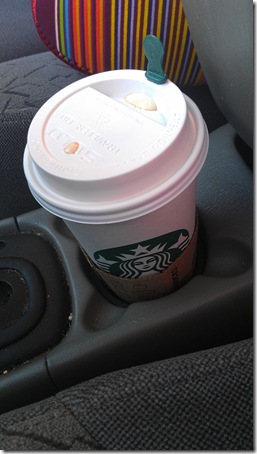 It was a sweet way to start the day, but even sweeter was this cool sign and these adorable gift bags waiting for me at my desk!

It’s people doing yoga in the shapes of the letters. I loved it!  My birthday buddy (who decorated my desk) got me the cutest pair of Lululemon socks (one says RUN and one says FAST) and homemade granola, which is the best granola I’ve EVER eaten.  I’ll have to ask her to anonymously leave me the recipe soon, since I won’t find out who it is until December.

After a happy day at work, I whizzed home to pick up the BOY and head out for the Mariano’s Grand Opening!

The store was jam packed with fresh and colorful produce and people.  It was late, but we explored all of the aisles impressed with the selection…especially in the bakery and bulk bins! 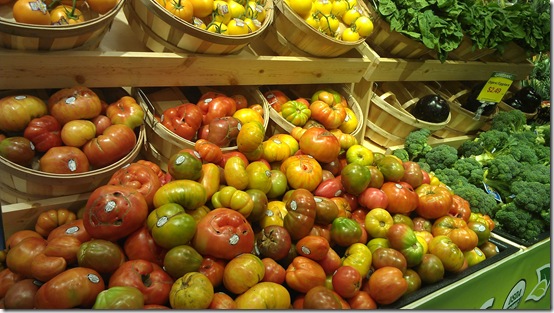 By the time we got home, it was after 8:30pm, which is why I won’t take too long for the rest and the real purpose of this post.  As I’ve mentioned when I described this incredible salad, we had a whole bunch of leftovers from this weekend’s BBQ.  Yesterday, I decided to turn everything into enchiladas.  In the past, I’ve only made enchiladas with red sauce, but I got it in my head that I wanted to try making a Mole Sauce.  I looked online for a few different recipes.  The catch…I didn’t want to have to run out to the store.  I found a few recipes and chose one from Positively Vegan.  I had everything in the house that I needed to make a quick sauce, and all my leftovers to turn into enchiladas.

Instead of carob, I used cacao, and then threw everything into the blender. 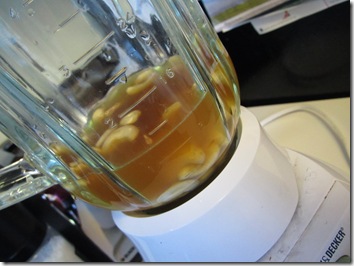 I was dong well until the last ingredient…diced tomatoes.  How is it possible that I didn’t have a can of diced tomatoes in my house???  I did have some farm share tomatoes, so I added those instead.  My mixture was thick and brown.

However, here was only one problem…I had no idea what mole was supposed to taste like. 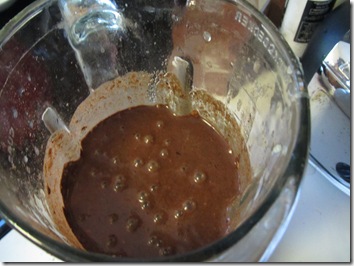 I proceeded forward making the enchiladas…beef, rice, and cheese for the BOY and chicken and leftover veggies for me.

I poured the sauce over the top and loaded the BOY up with cheese. 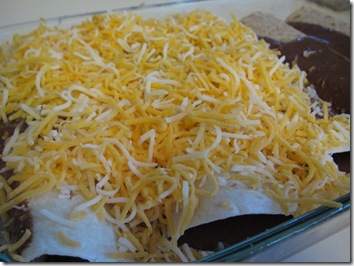 The BOY walked in the door from school just before I pulled dinner out of the oven.

I was nervous to serve my first mole, but it actually turned out REALLY good.  The BOY ran off with his plate before I could get a good pictures, but once he tasted the enchiladas, he was surprised (that I had made the sauce) and impressed with my effort.

I think a full can of tomatoes would have balanced out the chocolate flavor a bit, and I picked up 3 cans at Mariano’s this evening…just to have in the house for the next time!

Typically, I am happy to eat leftovers for a few days, and I don’t think about spicing them up.  This was a creative way for me to use all of our meat, tortillas, and cheese, and it was a HUGE success!  I was so proud of my dinner, that I had to share the mole sauce with ya’ll tonight!  It is so easy to fill tortillas with whatever leftovers you have in the house, cover them in this delicious sauce, and bake with cheese.  Enjoy!

What is your favorite way to use leftovers???

In your blender, place, but don’t blend:

1/2 cup raw cashews
1 cup vegetable broth
The broth will soak the cashews for a few minutes while you add everything else.

Next add all of the following to the blender:
3/4 cup carob powder (carob is a legume, and contains protein)
2 tsp garlic powder
1 tsp onion powder
3 tsp cumin
1 1/2 tsp chipotle powder
2 tsp chili powder
1/2 tsp cinnamon
1 1/2 tsp sea salt
3 T agave syrup or nectar
1/4 cup olive oil
juice of 1 lime
1 can (14.5 oz) diced tomatoes (the tomatoes go on top to keep all the powders from "poofing" out the top of the blender)

Blend until very smooth. Pour as much as possible into a saucepan or bowl.
Add 1/2 cup water to the blender, put the lid on, and shake it up to loosen all the last bits of sauce. Stir the water/sauce into the rest of the sauce, and you won’t waste a bit.

Note: If making enchiladas, spread sauce on bottom of pan, place stuffed tortillas over the top, cover with mole sauce and cheese and bake at 350 degrees for 20 minutes.

In the mood for Mexican, these are my two favorite enchilada recipes!

6 thoughts on “Making the Most of Leftovers”