I know that not everyone is lucky enough to work in a place where the staff rotates bringing in treats every Tuesday for ‘Treat Day’.  I bet you wish that you were.  Tomorrow is my day, and so I spent today in the kitchen making a bunch of dips and desserts to bring to work.  I made SO many things and figured I could spread them out a bit across the blog.  This was the most complicated of all the recipes.  I’ve made Whoopie Pies one time in the past.  They tasted wonderful but didn’t look so pretty.

I got this book as a gift and I’ve been eager to try making the S’mores recipe.  What’s fun about this book is that it breaks down the flavors into cakes and fillings and you can mix and match them.

I decided to make the graham cakes and the marshmallow filling. I thought I could add some chocolate chips to round out the S’mores.  The first problem I came across while I was shopping today….I couldn’t find graham flour anywhere. I know you can buy it online, but I didn’t have time.  Instead, I crushed up some graham crackers and substituted 1/2 cup graham crumbs and 1 cup of whole wheat flour. 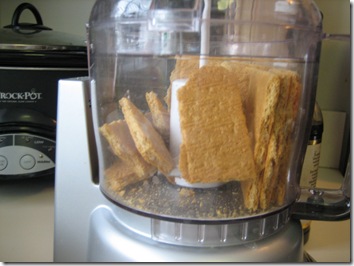 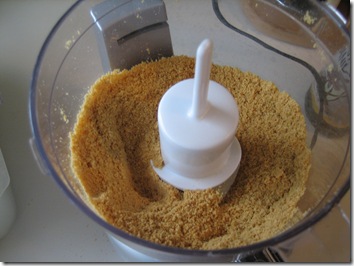 I combined all my dry ingredients. 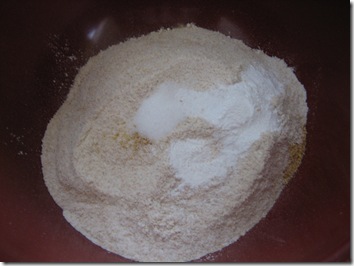 Then I creamed the butter, sugar, and shortening.

After adding the eggs and buttermilk, the next step involved combining milk, vinegar, and baking soda.  I’ve never seen this before and I am not sure if it is for taste or for texture.  I combined the ingredients and got a white bubbly mixture. 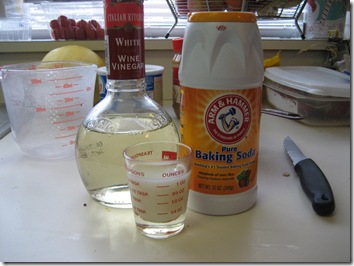 I added the white mixture and the dry ingredients. 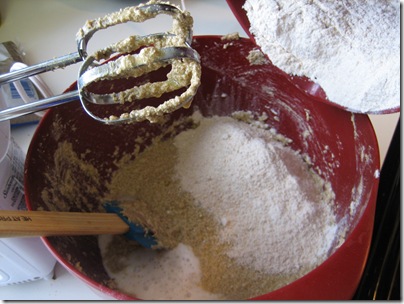 Then beat everything until just combined.  I added vanilla and beat until fluffy.  The dough smelled a lot like graham crackers, so I think my substitution worked out well.

The next step is actually making the pies.  After my first attempt at Whoopie Pies, I found this fabulous pan at Crate and Barrel. I was super excited to try it out and it worked great.  The pies grew a bit in the oven, but over all they looked good. 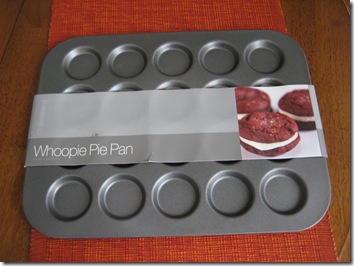 After the pies cooled, it was time to make the filling.  It’s been a long time since I’ve had marshmallow fluff…probably college when we used to mix it with peanut butter.  It’s sweeter than I remember, but still tastes delicious with peanut butter.

I combined all the filling ingredients and beat until fluffy.  The author of the book says that she sets her mixer and then leaves the room.  Since mine is a hand held mixer, I had to hold onto it, but I tried to make the frosting as fluffy as possible (despite all the sticky ingredients).

I set up a little assembly line to make my pies.  Then I rolled them in mini chocolate chips. I was surprised at how cute they turned out. 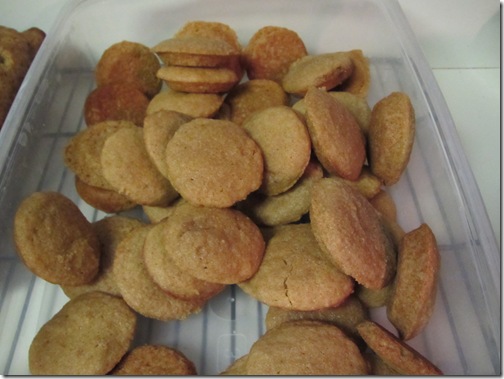 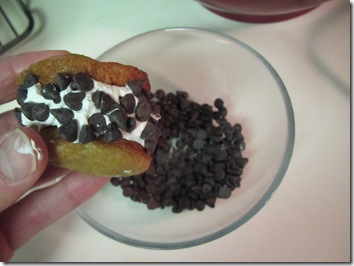 The pies are very rich tasting and perfect with a glass of milk!

Stay tuned for this recipe and more ‘Treat Day’ recipes!