Nothing pairs with day time television as well as a fresh baked quick bread.  I have wanted to make this bread for awhile because it looks delicious and I just happen to have all the ingredients in my house.  I am slightly intimidated by the stiff peak of egg whites, so I figured googling a picture would help. 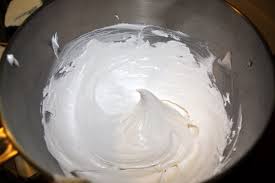 I started by boiling my carrots and mixing my dry ingredients.

I realized I had a little helper in the Kitchen.

Then, I separated my eggs with the help of my egg separator (another Bday present from Sur La Table).

And then the I began to whip my egg whites.  I figured after a tough TRX workout at the gym this morning, I would give my arms a break and use my immersion mixer.  I started mixing, and then kept mixing, and mixing…and then assessed the egg whites which were ‘stiff’ but not yet a ‘peak’.  So I continued to mix…I revisited my picture as a reference and decided I had a good enough peak to move on.

And continued on my way…until my bread was ready to go into the oven.  I used an aluminum pan for easy transport.   The bread looks a little flat so I am hoping it would expand in the oven.

It grew a little and looks pretty good.  The author recommends toping it with applesauce.  I think next time, I need to cut my carrots a little smaller, but you learn as you go.

Next up…old bananas.  So many recipes, so little time!

In small saucepan place carrots and enough water to just cover them.  Bring to a boil and cook for 5 minutes.  Remove from heat, drain, and let cool.

In another bowl, whip egg whites until stiff.

Prepare a 9×5 inch loaf pan with cooking spray.  Pour batter into loaf pan and bake for 60 minutes or until cake tester comes out clean. Makes 10 servings (depending on how you slice the bread).